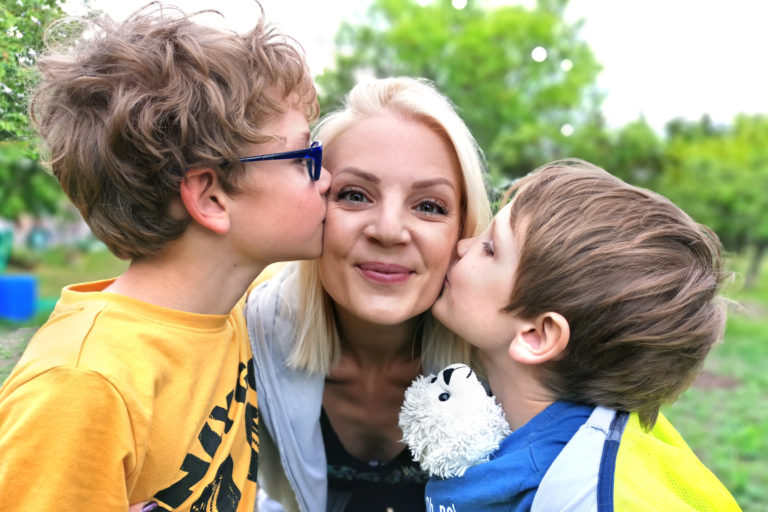 In the case of Barborka, you will know her voice rather than her face. She specializes in dubbing, moderates on the radio, and occasionally appears on television screens. You could see her, for example, in Family Cases, she also starred in the series Fathers and Hospital.

She is the mother of two children Filip (8) and David (6). We learned that the elder had signed up for our English summer camp, so we talked to her about English, but also about how she got to us.

Which class do your sons attend?

The elder, Filipko, is currently in the second grade and Dávidko is a pre-schooler, he hasn’t started primary school yet.

To what extent have they started to learn English?

Filip goes to English class; they have three hours a week. I’m going to put the younger one in a language class. He isn’t learning any foreign language at pre-school at the moment. We just had a parents’ association meeting recently, and I asked about English specifically, because it doesn’t seem to me that he really knows anything about it. A few words, but that’s all. Apparently, it’s just a basic level of English so far, so we’ll see. When I see my brother’s three-year-old daughter speaking almost better than I do, I think it’s a pity they don’t have more English lessons.

Is it important for you as a mother that your children speak a foreign language?

Of course, it is. Today we are so connected to the world that not knowing a second language, especially English, is already a problem. Everyone expects it, it is almost a matter of course when entering employment. And it’s great to understand people wherever we go. My son likes to watch technical documentaries as well as documentaries about animals, and some of them are only in English so at least it motivates him a bit to learn it.

Do you have to help them with English and learn it with them?

I have to. Filip doesn’t like it very much yet, so we are figuring out how to motivate him. We are not very successful yet. In the near future we will definitely look for some private tutor or language school.

Have they ever been to an English camp?

He has already been to a camp, but it wasn’t an English camp, so this will be his first time. It was time for him to try it. I’m quite happy that he’ll goes there alone, I think he could learn more there. If he went with a friend, they would definitely talk only in Slovak.

How did you find out about this camp?

I was looking for a camp for the summer and since English is so weak in our country, it seemed like a good idea. I searched the internet, read the reviews, and The Bridge Camp came out the best of all, it has very good reviews. My acquaintance, who has been studying with them for almost a year, even confirmed it for me. That convinced me.

Does the location and time suit you?

At the beginning, I was a little afraid of the locality and where I would park in the centre in the morning and then walk to the school, but the children are “collected” in front of Zochova and then go together, so, fortunately, my worry disappeared and I appreciate the possibility of the children being “collected” very much.

Aren’t you a little afraid that Filip won’t understand the lecturer?

So, I’m not afraid of that. He has the best memories of his Italian skiing instructor, they didn’t understand each other at all and yet they found a way to understand each other, Filip learnt new Italian vocabulary with each lesson and decided that he was the best instructor. He didn’t mind at all that he didn’t understand him, he learnt to ski well. It’s always about the lecturer or teacher, when Filip is interested, the speech barrier quickly disappears. The instructors at The Bridge Camp also have excellent ratings, as does the camp and the entire language school, so in the corner of my soul, I believe it will be like skiing. And his English will be great after the camp.