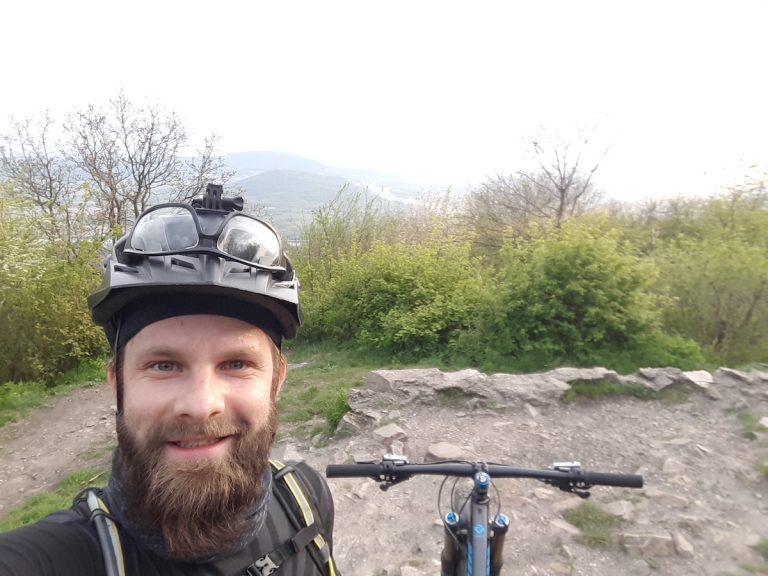 Our teacher Juraj likes cycling and will tell you why you should start cycling too. Read the interview and find out why cycling is better for health than running and why Juraj would like to own up to four bicycles.

How many bikes do you have?

I have two bikes – an older hard-tail and an enduro full-suspension bike. I really like both of them, but I’ve been spending most of my riding time on the enduro.

What is the most interesting about biking for you?

There are so many things – the endorphins after a good workout, the adrenaline from jumps, the excitement of fast downhills, reconnecting with nature, freedom of movement when the only limitations are the abilities of your body. I cannot imagine a better stress relief.

Do you like to ride more on flat roads or in the mountains? Why?

I definitely like mountains more. It may be because of the landscapes you get to see – a view off the top of a mountain is the best reward after a steep ascent. You can avoid the rush of the city and traffic. Not that I would have anything against road bikes, but I naturally lean towards mountain biking. Though it is said that there’s only one kind of cycling – the good kind; and I completely agree. If I could cycle every day, I would try and do it all.

What is your opinion on electric bikes?

E-bikes have become hugely popular, even among pro-riders, so I figure there must be something about them. I don’t own one, though, and am not planning on getting one any time soon either. Maybe when I’m too old to only use my own muscles. (sorry, all e-bikers 😛 ) However, I can imagine it’s the best choice when people of different abilities want to cycle together. It can be a social sport after all.

Have you had any accidents or injuries on the bike?

There have been a few, mostly minor, injuries. That’s a part of the deal if you ride more difficult terrain, I think. This winter though, just before New Year’s, I had a crash on a trail at Kamzík and dislocated my collar bone. I had to undergo surgery and was out for about 2 months. After a month of physiotherapy, I slowly started on the roads. I’ve been doing exercise to strengthen the arm almost every morning and I’m almost back to normal now. After the surgery, I was curious whether it would have some effect on my riding. Luckily, there isn’t much more fear, just a bit more respect, so I´ve been trying my luck less often.

Do you prefer carbon, steel, or aluminum bike frames?

Both my bikes are aluminum and I’m completely fine with that. Steel ones are probably a bit too heavy and carbon completely out of my price range. So, it’s quite an easy choice for me 🙂

What about you and gravel bikes?

In a perfect world, I would probably own four bikes – each one for different terrain – and a gravel bike would be one of them. It’s the perfect compromise between a mountain and a road bike. Actually, I’ll see whether I’ll use my hard-tail often enough, now that I have two mountain bikes. If not, I’ll exchange it for a gravel bike for sure!

Why should I start with it?

Cycling gives you the connection with the nature of hiking and the possibility of distances almost as long as on a motorbike. It makes you focus – on your breathing and pedaling rhythm when ascending, and on the terrain when riding downhill. It’s less damaging for the body than, for example, running, because there’s less impact on leg joints. Because pedaling is a rhythmic motion, it’s not only a great cardio exercise, but it also has the ability to bring one into a sort of a meditative mode which perfectly clears your mind. In my experience, the world simply makes much more sense after I come back home from a bike ride.