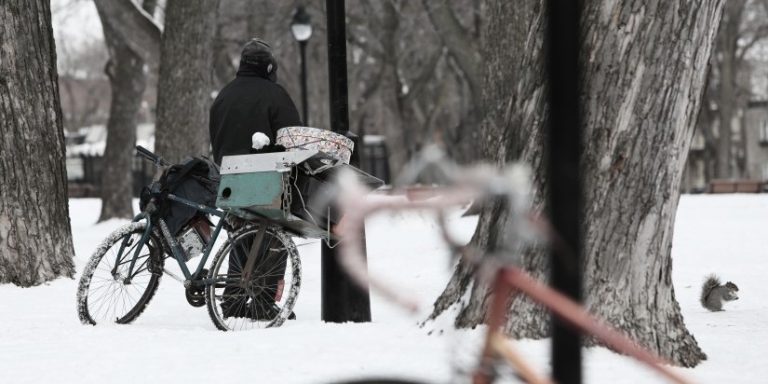 Since moving to Bratislava, I have been consistently amazed at the civic awareness of its inhabitants. Here on this blog, I would like to take the opportunity to note my observations on the ways in which many Slovaks, as well as my workplace The Bridge, are doing their part to contribute to the wider community.

A chance to give others a chance

They say that the worth of a society is only as great as the effort it puts into helping its most vulnerable members, and so this brings me to the topic of Mesiac bez domova (Month without a Home), which took place here in Bratislava from the 13th of November until the 13th of December.

This festival was organized to help raise awareness of the situation this city’s 4,000-odd homeless residents face. It provided venues for open discussions about poverty and homelessness, even offering the city’s residents the opportunity to experience what it’s like to sleep rough.

For me, it was fascinating to see an entire month dedicated to shining the spotlight on such a ubiquitous, yet somehow tacit, issue. There is something to be said about the effort to cultivate awareness of and empathy for the unfamiliar, which I have witnessed over and over again from my small window looking out onto Slovakia.

Participation in Mesiac bez domova was, of course, voluntary, but I was nevertheless pleased with the range of people looking to contribute, including The Bridge.

On evening of the 11th, the school organized a bake sale to raise money for the Vagus civic association, a group that has been working hard in Bratislava to provide the homeless with not only adequate and accessible shelter, but also with employment opportunities that will put them in contact with the wider community.

The Bridge staff prepared and sold delicious sweets (and of course, kapustnica) to people passing by its location on Baštová, raising a couple hundred euro while celebrating and mingling in the Christmas spirit!

Ah, a good conversation is a truly delightful thing, for it opens the minds of those involved. Ideas are exchanged, new words are learned, new links are formed between the participants.When learning a language, it is essential to speak it, making and correcting your mistakes as they arise.

Conversation courses with a native speaker are a perfect way to target the learner’s specific needs; The Bridge, of course, offers many of these classes. But the most special (in my opinion) takes place in the café Dobre&Dobré (Well&Good).

I can think of no better location to practice learning a new language than in Dobre&Dobré. For those of you unfamiliar with this recent addition to Bratislava’s exceptional café culture, Dobre&Dobré, with its classiest of atmospheres, was a project set up by Vagus to employ a handful of homeless residents.

It is, in my opinion, a beautifully innovative way to empower these men by providing them with training as servers, placing them in direct contact with “everyday” citizens, all the while giving them the emotional and professional support necessary in fulfilling their role as liaisons between worlds that rarely engage with one another.

Using this venue as a means to facilitate conversation and bridge distances between people seems perfectly dobré to me!